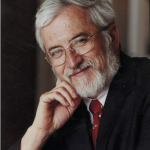 Historically, Hebrews is thought of as a letter from Paul and is grouped with his other letters in the New Testament.  However, this assumption has been questioned from as early as the third century.  Equally mysterious is the identity of the audience of this document.  It is clear that Hebrews does not follow the form of an early Christian letter; the author calls it a “word of exhortation”. To our ear, it sounds like a homily (or a collection of homilies).

Nevertheless, Hebrews contains a rich message regarding the significance of Christs’ life and death.  The way in which the claims of this writing are expressed is not necessarily familiar to twenty-first century ears so some study and discernment is required to “mine the gold”. This study aims to help the learner reflect on each of these distinctive claims, to understand the context in which they were originally presented, and to reflect on the application of their understanding to a Christian life today.

Dr. Harold W. Attridge is the Sterling Professor of Divinity at Yale Divinity School. Professor Attridge, dean of Yale Divinity School from 2002 to 2012, has made scholarly contributions to New Testament exegesis and to the study of Hellenistic Judaism and the history of the early Church. His publications include Essays on John and Hebrews, Hebrews: A Commentary on the Epistle to the Hebrews, First-Century Cynicism in the Epistles of Heraclitus, The Interpretation of Biblical History in the Antiquitates Judaicae of Flavius Josephus, Nag Hammadi Codex I: The Jung Codex, and The Acts of Thomas, as well as numerous book chapters and articles in scholarly journals.

He has edited twelve books, most recently, with Dale Martin and Jurgen Zangenberg, Religion, Ethnicity and Identity in Ancient Galilee; and The Religion and Science Debate: Why Does It Continue? Professor Attridge is the general editor of the HarperCollins Study Bible Revised Edition (2006).

Rev. Dr. David L. Bartlett, who passed away in 2017, was the J. Edward and Ruth Cox Lantz Professor Emeritus of Christian Communication at Yale Divinity School and Distinguished Professor Emeritus of New Testament at Columbia Theological Seminary. A graduate of Swarthmore College and Yale University, Prof. Bartlett was the author of numerous publications including Fact and Faith, The Shape of Scriptural Authority, Between the Bible and the Church, and What’s Good About This News? Preaching from the Gospels and Galatians, among others. He was also the co-editor of the Westminster Bible Companion and Feasting on the Word commentary series. An ordained minister in the American Baptist Churches, USA, Prof. Bartlett served as the Senior Minister for congregations in Minnesota, Illinois, and California.